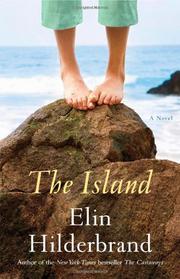 Queen of the summer novel—how could she not be, with all her stories set on an island—Hilderbrand delivers a beguiling ninth (The Castaways, 2009, etc.), featuring romance and mystery on isolated Tuckernuck Island.

The Tate family has had a house on Tuckernuck (just off the coast of swanky Nantucket) for generations. It has been empty for years, but now Birdie wants to spend a quiet mother-daughter week there with Chess before Chess’s wedding to Michael Morgan. Then the unthinkable happens—perfect Chess (beautiful, rich, well-bred food editor of Glamorous Home) dumps the equally perfect Michael. She quits her job, leaves her New York apartment for Birdie’s home in New Canaan, and all without explanation. Then the unraveling continues: Michael dies in a rock-climbing accident, leaving Chess not quite a widow, but devastated, guilty, unreachable in the shell of herself. Birdie invites her younger daughter Tate (a pretty, naïve computer genius) and her own bohemian sister India, whose husband, world-renowned sculptor Bill Bishop, killed himself years ago, to Tuckernuck for the month of July, in the hopes that the three of them can break through to Chess. Hunky Barrett Lee is their caretaker, coming from Nantucket twice a day to bring groceries and take away laundry (idyllic Tuckernuck is remote—no phone, no hot water, no ferry) as he’s also inspiring renewed lust in Tate, who has had a crush on him since she was a kid. The author jumps between the four women—Tate and her blossoming relationship with Barrett, India and her relationship with Lula Simpson, a painter at the Academy where India is a curator, Birdie, who is surprised by the recent kindnesses of ex-husband Grant, and finally Chess, who in her journal is uncoiling the sordid, sad circumstances of her break with normal life and Michael’s death.

Hilderbrand’s portrait of the upper-crust Tate clan through the years is so deliciously addictive that it will be the “It” beach book of the summer.