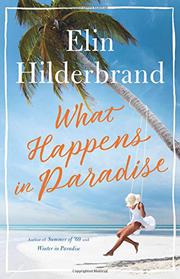 WHAT HAPPENS IN PARADISE

Back to St. John with the Steele family, whose tragic loss and horrifying discovery have yielded an exciting new life.

In Winter in Paradise (2018), Hilderbrand introduced Midwestern magazine editor Irene Steele and her adult sons, Baker and Cash, then swept them off to the island of St. John after paterfamilias Russell Steele was killed in a helicopter crash with his secret mistress, leaving a preteen love child and a spectacular villa. While the first volume left a lot up in the air about Russell’s dubious business dealings and the manner of his death, this installment fills in many of the blanks. All three Steeles made new friends during their unexpected visit to the island in January, and now that’s resulted in job offers for Irene and Cash and the promise of new love for single dad Baker. Why not move to St. John and into the empty villa? Mother, sons, and grandson do just that. Both the dead mistress’s diary and a cadre of FBI agents begin to provide answers to the questions left dangling in Volume 1, and romantic prospects unfold for all three Steeles. Nevertheless, as a wise person once said, shit happens, combusting the family’s prospects and leading to a cliffhanger ending. On the way, there will be luscious island atmosphere, cute sundresses, frozen drinks, “slender baguette sandwiches with duck, arugula and fig jam,” lemongrass sugar cookies, and numerous bottles of both Krug and Dom Pérignon, the latter served by a wiseass who offers one of his trademark tasting notes: “This storied bubbly has notes of Canadian pennies, your dad’s Members Only jacket, and…‘We Are Never, Ever, Ever Getting Back Together.’ ” You'll be counting the days until you can return to the Virgin Islands with these characters in the concluding volume of the trilogy.

Print the bumper sticker—"I'd Rather Be Living in an Elin Hilderbrand Novel."