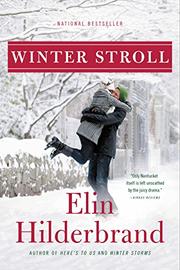 In a sequel to last year's holiday novel Winter Street, Hilderbrand improves on the first by delving deeper into the emotional lives of the Quinn clan.

A year has elapsed and the events that closed the first novel have developed: thanks to the generous $1 million loan from his first wife, world-renowned newscaster Margaret Quinn, Kelley can keep his Winter Street Inn open, although it's lonelier now that his wife, Mitzi, has left him for George, their one-time holiday Santa. Kelley and Mitzi's son, Bart, is still MIA in Afghanistan, and Mitzi is falling apart; unhappy with George, she spends most days drunk. The lives of Kelley and Margaret's three children are also in crisis. Patrick is now in prison for insider trading, while his wife, Jennifer, tries to hold their family together with the help of illicit prescription pills. Ava seems to have found “the one” with vice principal Scott, if only she could stop thinking about wild Nathaniel. And middle son Kevin has made good with girlfriend Isabelle and their infant, Genevieve. Hopefully he can avoid his first wife, the troubled Norah, who has returned to the island. This year's Winter Stroll, a Nantucket Christmas tradition, coincides with Genevieve's baptism, bringing together all the Quinns and their issues. Also on island for the festivities is Margaret's beau, Drake, a pediatric neurosurgeon and about as perfect as can be, if only Margaret and he could bow out of their schedules and enjoy each other's company. In the ensuing few days, everyone has life-altering decisions to make—even Ava, now that Nathaniel has returned to the island to propose. Only Nantucket itself is left unscathed by the juicy drama. Described in all its magic (after all these years, one hopes Hilderbrand is on the tourist board's payroll), it seems impossible for such turmoil to exist on the charmed island.

Although some of the Quinns' problems are resolved, many are not, happily promising a third installment next year.