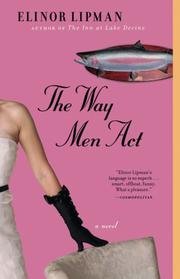 Lipman's second novel may not have all the bite of her first (Then She Found Me, 1990), but, still, it serves up a ripe slice of love and life, late-80's style, complete with relevant issues: town vs. gown, truth vs. deception, and (the biggie) man vs. woman. At age 30, still single, Melinda LeBlanc has heard all the standard letdown lines. She even sees them coming. ""Ian sighed a long, sensitive-male's sigh, the universal preamble to the speech about how he wasn't ready/interested/looking/worthy or any other lame excuse for not calling this a date."" But forewarned is not necessarily forearmed, and Melinda takes more than a few hits in the war zone of relationships. Recently returned to her hometown of Harrow, Massachusetts, a newly gentrified college town, she works as a floral designer and spends a fair amount of time arranging elaborate wedding bouquets for her former high-school classmates. She also attempts to arrange a little matchmaking for two old friends--Libby Getchel, an artsy seamstress, and Dennis Vaughan, a handsome black man who has earned renown as the owner of Brookhoppers, a fancy fly-fishing boutique. Things go amiss, however, in both the matchmaking and floral-arranging departments. But after a certain amount of casual coupling (it's surprising that a book so brimming with up-to-date issues never tackles the problem of safe sex), Melinda finally sorts out which ones to throw back and which one to keep. When she reels him in, it's no big surprise to anybody--except to wry, wise Melinda herself. Compelling, darkly funny, defiantly romantic: a modern-day tale of manners.