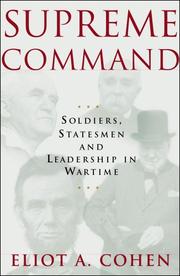 Soldiers, Statesmen and Leadership in Wartime

by Eliot A. Cohen

Those who maintain that Vietnam would have been an American victory if only US generals had not had their hands tied by desk jockeys back home will doubtless take issue with Cohen’s thesis, which argues that inflexible military professionalism was one factor in America’s defeat. Reinforcing (but also qualifying) the adage “War is too important to be left to the generals,” Cohen (Strategy/Johns Hopkins Univ. and US Naval War College) examines the history of military campaigns in which democratic governments managed their generals in the field. Among the most successful was Abraham Lincoln’s constant intervention in Union military strategy; rather than concentrate on capturing the Confederate capital of Richmond, as his generals wished, Lincoln insisted that the war be fought on the periphery of the South, steadily weakening the enemy by attrition. Taking issue with the “Lincoln finds a general” school of historiography, Cohen effectively demonstrates that the president “exercised a constant oversight of the war effort from beginning to end.” So did French leader Georges Clemenceau, who secured victory in WWI by balancing the competing demands of two very different generals, Pétain and Foch, and of independent-minded allies. So too did Israeli premier David Ben-Gurion, a gifted student of history who introduced civilian control (and guerrilla tactics) into the new nation’s army, making it something of an “organizational anomaly,” but a remarkably effective one. Although he appreciates professionalism and warns of the dangers of civilians without military experience being given too much managerial authority over affairs in the field, Cohen clearly endorses the idea of civilian control over those whose mission is to kill people and break things.

Timely and provocative reading in a era of drum-beating.