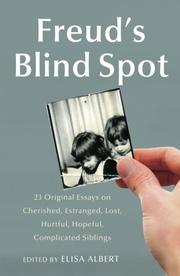 An introspective, provocative collection of firsthand accounts of siblinghood’s joys and pains.

Editor Albert (The Book of Dahlia, 2008, etc.) admits that her endeavor was cathartic, forcing her to process years of stressful domestic melodrama. She considers herself an only child, though she grew up with two brothers (“the sun and moon of my earliest memories”)—one died young and the other offered constant disappointment, resulting in a painful estrangement. Credited as the “unsung heroes of our psychological development,” the brothers and sisters gathered here range from the good to the bad, the infuriating to the beloved, leaving the meandering and the misunderstood to tug at readers’ heartstrings. Outspoken author Steve Almond (Rock and Roll Will Save Your Life, 2010, etc.) leads off with childhood memories of being cruelly terrorized by his brothers, which bled into his adult life, where all three now (barely) communicate “in a stunted, regressive manner.” Animation artist Eric Orner offers a skillfully drawn, bittersweet portrait of a ’70s summer vacation on Martha’s Vineyard spent consoling his younger brother Peter as their two bickering parents announced a divorce. Novelist Peter Orner (The Second Coming of Mavala Shikongo, 2007, etc.) counters his brother’s perspective by earnestly correlating his memories to the Kennedy Chappaquiddick tragedy. While many essays adeptly form quick, potent family snapshots—e.g., Jay Nicorvo’s nostalgic teenaged rooftop adventure—especially revelatory are the stories of siblings who’ve bonded with each other over life-changing decisions. New Yorker staffer Mary Norris’s brother Dennis guided his sister incrementally through his transsexual transformation to become Dee. T Cooper corners his brother, a former rocker, by e-mail with 38 probing questions that end up enlightening them both on adoption, their parents, guns and his life as a policeman. Forty-something Jewish sisters Jill and Faith Soloway take the same Q&A approach, querying each other on their inner-city Chicago upbringing, Jill’s life as an Emmy-winning TV producer and Faith’s single-motherhood and lesbianism. Other contributors include Etgar Keret, Nalini Jones and Rebecca Wolff.

Therapeutic for the editor and a significant bounty for readers.