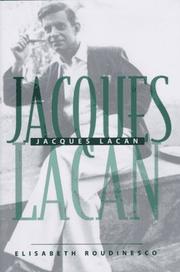 His Life and Work

An exhaustive, partisan, and clinical treatment of the psychoanalyst who became one of France's most famous intellectuals by flamboyantly combining Freudianism, linguistics, and structuralism. Roudinesco, of Paris's Ecole des Hautes Etudes en Sciences Sociales, suggests reading this work as the third volume in her History of Psychoanalysis in France; this intellectual biography shares with her earlier volumes a broad sweep and authoritative dissertation-like style, as she tracks Lacan's orbits among the era's great minds and squabbling psychoanalytic schools. Despite her nearly smothering respect for Lacan, she has discovered some unpleasant revelations and embarrassing facts. It's no surprise that Lacan—whose version of the Oedipal struggle is labeled le nom du päre (the name-of-the-father, or, punningly, the no-of-the-father)—had a father who was mostly absent. But it is startling to discover that the married Lacan fathered an illegitimate daughter with Georges Bataille's ex-wife and carried on a double life with his two families. If Lacan's personal life was complicated by his romantic affairs, his intellectual life was positively profligate, with ties to the structuralist anthropologist LÇvi-Strauss, the existentialist Heidegger, the decadent Bataille, the linguist Roman Jakobson, and the Marxist Louis Althusser (later declared criminally insane). Roudinesco also uncovers Lacan's early intellectual influences, including his brief infatuation with Spinoza and his fruitful encounter with Salvador Dal°'s ``paranoia-critical method.'' Roudinesco capably traces how this network of intellectual borrowings and Lacan's reworkings of Freud eventually led him to set up his own renegade school of psychoanalysis in Paris. Heidegger, himself no paragon of virture or readability, remarked after reading Lacan's often dizzying magnum opus, Ecrits, that ``the psychiatrist needs a psychiatrist.'' An encyclopedic biography most likely to appeal to experts, but enlivened by portraits of Lacan's mercurial personality and behavior. (22 photos, not seen)