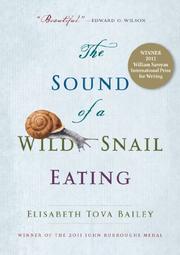 THE SOUND OF A WILD SNAIL EATING

In this quiet but moving debut, essayist Bailey chronicles a year during which her fascination with the simple life of a snail kept isolation at bay and gave purpose to her life.

At age 34, the author was struck by a neurological disorder while vacationing in the Alps, and her condition rapidly deteriorated as her autonomic nervous system became dysfunctional: “all functions not consciously directed… had gone haywire.” In order to receive care, she was moved from the Maine farmhouse where she had lived with her dog to a bare, one-room studio apartment where she was isolated from friends and family. The snail entered her life by chance when a visiting friend potted a violet and brought it to her, including the snail that had been sitting beneath its leaves. Bailey watched intently as the creature began to explore its new environment. Since it was nocturnal and her sleep was intermittent, the author had time to observe the animal eating, noting the “tiny, intimate sound” as it chomped on dead leaves from the violet plant or mushroom slices that she gave it. When her caregiver found the appropriate empty space, her friend helped to convert it into a roomy terrarium full of native plants from the snail’s own woods. Although she had not been familiar with the snail’s habits before welcoming her new companion, Bailey learned about the species through careful observation and the few things she was able to read during her recovery. Watching the snail was not only absorbing, but as the author was drawn into its “peaceful and solitary world,” she was soothed and left with a profound sense of how “life itself continues to evolve.”

A charming, delicate meditation on the meaning of life.