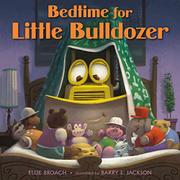 You can lead a bulldozer to bed, but you can’t make him sleep.

Seemingly acquiescent, Little Bulldozer is ready to be put down for the night by his human mom and dad. But even after a bath and tooth-brushing, sleep eludes him. In a series of actions that will be familiar to caregivers everywhere, Little Bulldozer thumps around his room, reads a book (The Little Engine that Could) too loudly to himself, and even attempts a failed stealth mission down the stairs to see what his parents are up to. Only when he slips into his older sisters’ room (a steamroller and excavator, respectively) does sleep finally overtake the restless little machine. With its tiny human parents/enormous inhuman children dynamic, the book owes more than a passing nod to Jane Yolen and Mark Teague’s How Do Dinosaurs series. But if Broach’s tale is by no means original it nevertheless remains soothing in its familiarity. Done in pencil and Adobe Photoshop art, the accompanying illustrations are sweetly humorous. They even contain the occasional oddball detail, such as background family portraits showing ancestors with old-timey car heads. Jackson’s art also plays up the inherent ridiculous logistics of an inside bulldozer’s life, such as how he would act on a spring mattress or how caterpillar treads might tiptoe. Little Bulldozer’s parents have brown skin and black hair.

While construction-equipment bedtime books have become a genre in and of themselves, there’s still room for one more good-hearted tale of antsy, agitated equipment.