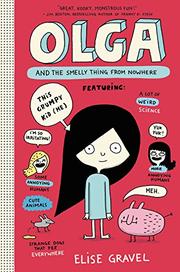 OLGA AND THE SMELLY THING FROM NOWHERE

From the Olga series, volume 1

A young girl who prefers science to people discovers an adorable and smelly little creature.

With an inquisitive mind and a dark teardrop-shaped swoop of hair, Olga may not have many friends, but she loves animals and thinks even their "farts are cute." She studies them and carefully transcribes her observations; she hopes someday to hang out with Jane Goodall. When she hears a scary rumble in her trash can, Olga discovers Meh, a pudgy, smelly creature that she describes as a "cross between an inflated hamster and a potato drawn by a three-year-old." Like any good scientist-in-training, she observes Meh, trying to discern his habits and his diet. When Meh goes missing, Olga must recruit actual people to help her find him—including two pop-star–obsessed girls she calls "The Lalas," a friendly boy with a tall scribble of hair and an incontinent dog, a punk-rock librarian, and a goofy but helpful shopkeeper. Gravel's tale is a visually interesting mix of illustration and story, punctuated by numerous lists, comic panels, and cartoon diagrams and led by a smart female protagonist. Covering everything from zoology to poop jokes, Gravel has painted her tale with a broad brush that should render this an easy sell to most young readers. The human characters all have paper-white skin, and there is no other cueing of racial difference.