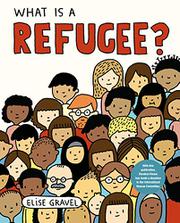 WHAT IS A REFUGEE?

A straightforward and simple introduction to what being a refugee means, accompanied by glimpses into real refugees’ lives.

Sensibly depicted throughout the book as people of varying skin tones; with black, brown, blond, or red hair; of young or old age; and with or without glasses, headscarves, or facial hair, refugees are portrayed and described as “just like you and me.” They've been forced to flee their homes on account of danger, although many would have preferred to stay with friends and family, and are described as fortunate if they find a new country where they can live unremarkable lives. Gravel describes war, oppression, and discrimination as reasons to flee one’s country, but she misses natural disasters and environmental degradation as other potential reasons, and despite her repeated emphasis that refugees are “just like” readers, she highlights the stereotypical circumstance of refugee camps. The book ends with an engaging collection of portrayals of refugees: children from different countries speaking about their favorite things, followed by famous refugee women and men from around the world. Readers may find the single sentence that some countries “don’t want to welcome more refugees” inadequate. The emphasis on “more refugees” has the potential of shifting the conversation away from justice for refugees to justifying racist exclusionary policies.