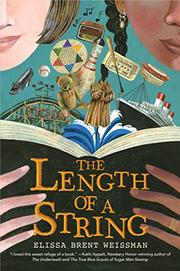 THE LENGTH OF A STRING

Twelve-year-old Imani, a black girl adopted into a white Jewish family, struggles to negotiate her understanding of identity and place while also untangling the skein of her great-grandma’s legacy.

Imani’s journey to find her origins leads her to seek resolution and guidance in Great-Grandma Anna’s diary, which details her flight from Luxembourg to escape Nazi occupation. Along the way, Imani faces awkward, heart-wrenching confrontations with a mother not ready to answer questions about her adoption and about the challenges of being 12, almost 13, while on the outside of insider knowledge about both her birth and adoptive families. Cybils Award winner Weissman (Nerd Camp, 2011) creates a narrative strengthened by her smooth temporal transitions between 1940 and 2014 and her fresh descriptions of life in New York during the early 1940s, including the experiences of Jews in America during the Holocaust. However, Weissman’s too-brief inclusion of African-American traditions and the few pointed situations in which Imani is quizzed or fetishized don’t give readers the opportunity to explore Imani’s thoughts about being a black girl in majority-white spaces. Imani’s preoccupation is with finding her biological parentage, a journey connected to but not the same as examining her racial identity; this gives references to her racial identity a superficial feel.

Still, readers will enjoy this trip through time in a notable new transracial-adoption narrative.