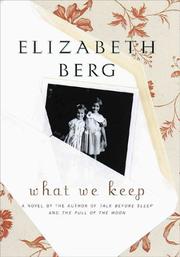 The prolific Berg’s fifth novel (Joy School, 1997, etc.) pays an unremarkable visit to that overworked territory where mothers and daughters visit to blame and explain, this time in the story of a daughter on her way to meet the mother she hasn—t seen for 35 years. Berg has an easy style and good ear, which makes for agreeable storytelling, but, here, the story itself is less impressive. The trouble is that the plot fails to seem plausible or compelling, draining the emotion from what a supposedly dramatic meeting, with attendant explanatory revelations, of a mother and her two estranged daughters. The narrative is told in flashbacks younger daughter Ginny as she flies to San Francisco. There, she joins sister Sharla, who has persuaded Ginny to come along only by hinting that she’s terminally ill and wants to make her peace with their mother. As for Mother, she seems a parody of a 1950s Mom: baking from scratch, dressing immaculately, even hosting a Tupperware party. Dad’s also a stereotype—a well-meaning man who works hard at a boring job, but isn—t sensitive (he doesn’t get it, for instance, that his wife wants to go dancing). The two girls are happy, though: They love Mom’s cooking and the way she helps them create nifty projects. And yet one summer, when glamorous free spirit Jasmine, allegedly on the run from her rich but abusive husband, moves next door, their lives fall apart. Mom gets restless and decides to leave Dad and the girls to become an artist. Which she does, and isn—t forgiven until they all meet up again, realizing then just how unhappy Mom was. But why Mom had to make so extreme a gesture is never persuasively explained. An easy read, but intellectually and emotionally lite-fare, despite the suggestions of profundity (“I now believe we owe our mothers and our daughters the truth”). (Book-of-the- Month selection; author tour)