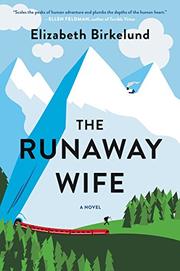 Birkelund (The Dressmaker, 2006) takes readers on an improbable journey in the Bernese Alps.

Jim Olsen is a Midwesterner, steady and reliable. When his fiancee dumps him after he’s been laid off, he takes his first vacation in years with an old friend, Ambrose. At a hikers’ “hutte,” they meet three sisters, Thalia, Helene, and Clio, who ask the men's help in finding their mother, Calliope (yes, they're named for muses, but they do not give Jim any inspiration other than to act irrationally), so they can return to their own busy lives. Lulled by wine and flirtation, “Jim didn’t think; he just said the words: ‘I’ll do it.’ ” He and Ambrose look for Calliope and then, even though it’s foolish to hike alone in a strange place, Jim leaves Ambrose to continue the search, despite having a new job waiting for him in New York. Calliope has eluded her powerful husband’s search helicopters all summer, but Jim finds her quickly, aided by a local man who has been helping her hide. Things get even more unlikely as the story zigzags toward its climax and coasts to a lackluster conclusion. Jim’s motivation is unclear, his disregard for hiking safety in a place and season when precaution is everything is unrealistic, and Calliope doesn’t do anything to convince readers of the value of his quest. The sisters’ appearances at the beginning and end of the book are fleeting and similarly unconvincing. The characters are worse than unrelatable, which can sometimes be interesting; they are unreal. A strange story that can’t transcend the weird improbabilities that propel it and the out-of-this-world behavior of the characters who populate it.