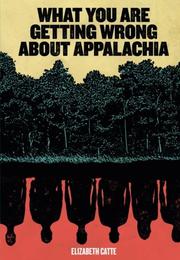 WHAT YOU ARE GETTING WRONG ABOUT APPALACHIA

A terse rebuttal to the vision of Appalachia popularized by J.D. Vance’s Hillbilly Elegy (2016).

As a historian from East Tennessee whose politics are to the left of Vance’s, Catte skewers his “asinine beliefs and associations,” which she connects with white-supremacist eugenics and insists do not reflect the rich diversity and often radical activism that she sees in her native region. Vance, she writes, somehow “transforms Elegy from a memoir of a person to the memoir of a culture,” a culture that is monolithically white and Scots-Irish, conservative, and culturally backward. In Catte’s analysis, much of the growth in the region has come from younger minorities, and most of the problems endemic to it have come from outside corporations that have exploited both its natural resources and its workforce. Furthermore, that power structure has wielded considerable political influence, just as money does elsewhere. Though she finds the term problematic, she says that the model of “internal colony” better explains the region’s dynamics, as powerful outside forces control the region’s resources and shape its destiny, with the residents becoming mere pawns in their game. In the 2016 presidential election, white voters in the region supported Donald Trump, as conservative white voters did elsewhere, but there was also considerable support for the brand of populism espoused by Bernie Sanders. As for Hillary Clinton’s ill-considered comment about how “we’re going to put a lot of coal miners and coal companies out of business,” Catte writes, “it’s not possible for anyone with more than passing knowledge of Appalachia and the coal industry to listen to those comments without cringing, regardless of one’s political affiliation.” Though Catte’s writing is not as colorful as Vance’s, her book refuses to allow his version of Appalachia to stand unchallenged.

A bold refusal to submit to stereotype.