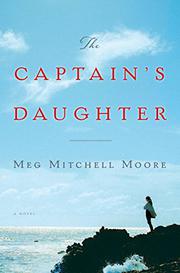 Moore (The Admissions, 2015, etc.) offers a mildly thoughtful, mainly comforting slice of domestic pie in this story of a wealthy woman who temporarily returns to the working-class town of her youth.

Eliza, a 37-year-old mother of two, has never felt completely at ease among her well-off neighbors in upscale Barton, Massachusetts, although her struggling architect husband, Rob, happens to be heir to a fortune and already owns a sailboat worth six figures. After receiving a call that her father has injured himself and needs her help, Eliza leaves her two daughters with Rob and drives to Little Harbor, Maine, only to discover that tough but good-hearted lobsterman Charlie’s health problem is worse than she thought—a brain tumor. Staying longer than expected to care for Charlie, Eliza confronts the choice she made as a teen to leave her first sweetheart, Russell, and the simple life of Little Harbor in order to attend Brown University. She also confronts a not-very-surprising secret she and Russell, still in Little Harbor, have not discussed since their breakup. While avoiding her still-simmering attraction to Russell, Eliza bonds with Mary, a local 17-year-old facing a crisis similar to the one Eliza handled at the same age. Meanwhile, back in Barton, Rob is about to lose his only client, a referral from his mother, whom Eliza has always found overbearing. Rob also carries on a dangerous flirtation with Eliza’s best friend. Less caddish than he sounds, Rob is a good father, loves Eliza, and is trying hard to be more than a spoiled rich kid; this is a novel in which everyone (with one cartoonishly villainous exception) is ultimately good-hearted and well-behaved.

Moore raises some interesting issues about class and the importance of money to happiness, but by solving her characters’ problems too neatly and painlessly she undercuts the novel’s seriousness, turning it into a Lifetime matinee.

SO FAR AWAY
by Meg Mitchell Moore
Fiction

THE ARRIVALS
by Meg Mitchell Moore

THE END OF THE POINT
by Elizabeth Graver
Fiction

THE ARSONIST
by Sue Miller
Fiction