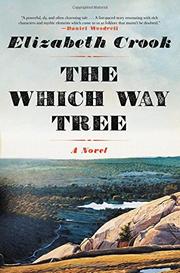 THE WHICH WAY TREE

A teen helps his younger half sister avenge the death of her mother in this Civil War–era tale of hardship and friendship.

One day in 19th-century Texas, a setting Crook (Monday, Monday, 2014, etc.) has used in three of her novels, a panther is mauling 6-year-old Samantha when her mother fights it long enough to save the girl but loses her own life. The incident leaves young Sam disfigured and bent on vengeance. Six years later, she and her half brother, Ben, having also lost their father to “fever,” are living miserably by themselves when the big cat returns. Their efforts to trap the beast fall short, but they find an ally in a Mexican man named Pacheco while they make a dire enemy of a Confederate soldier named Hanlin, who aims a gun at Sam in their first confrontation and loses a finger when she gets off a lucky shot. Also lucky is Hanlin’s knowledge of a dog in the vicinity that specializes in panther tracking and is owned by his uncle, Preacher Dob. After much palaver, Hanlin departs, for a time, while Dob and his old dog join the quest. The trek that follows recalls Cormac McCarthy’s horseback meandering and keen eye for terrain and flora in The Crossing. There are also obvious echoes of True Grit, though Sam is even more fiercely single-minded than Mattie. Most unavoidable is the 90-ton whale in the room. Ben, the engaging narrator who delivers the story in the form of dispatches written for a judge weighing evidence against Hanlin, mentions early on that he has twice read Moby-Dick. He refers to it many more times for any reader who doesn’t make a connection with Sam’s obsessive drive to destroy an almost-mythic beast that scarred her face and is known to some as El Demonio.

An entertaining picture of harsh, stark life in the Old West that maybe stretches plausibility a bit in pursuit of a good yarn.