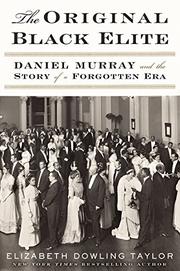 Daniel Murray and the Story of a Forgotten Era

A lively work chronicling the growth of the educated African-American movers and shakers in Washington, D.C., on the brink of renewed Jim Crow laws.

A longtime employee of the Library of Congress who wrote a significant bibliography of African-American literature, Daniel Murray (1851-1925), born to freedmen in Baltimore, ushered in a new class of educated black people advocating for reform in the nation’s capital. In this thorough work of research, Taylor (A Slave in the White House: Paul Jennings and the Madisons, 2012) focuses on Murray and his family as participants in the wave of hopeful race relations after the Civil War; ultimately, they had to come to grips with setbacks by the turn of the century. Murray and his family, mostly illiterate, were part of the “firsts” who moved to D.C. after the war. The young Murray, following his older brother, worked as a waiter in restaurants on the ground floor of the Capitol. Having been educated in Christian schools, he got a job under Librarian of Congress Ainsworth Rand Spofford as a personal assistant and eventually head of periodicals. Light-skinned, bright, and ambitious, Murray dabbled lucratively in real estate and was a model citizen chosen for President William McKinley’s inauguration committee; he married a woman of illustrious abolitionist background from Oberlin, Ohio, Anna Evans, and together they formed a “power couple” in black activist Washington, joining many reform causes—e.g., Anna’s devotion to creating kindergartens for African-American children. The author chronicles how two different intellectuals—Booker T. Washington and W.E.B. Du Bois—approached African-American concerns at the time and how one of the first black political groups was Murray’s National Afro-American Council, which eventually morphed into today’s NAACP. Murray’s special assignment research for the American Negro Exhibit at the Paris Exposition in 1900 would lead to his lifelong work culling African-American bibliography—the beginning of today’s black studies. As Taylor demonstrates, Murray was a pioneer and patriot.

Important research on an overlooked but significant figure.