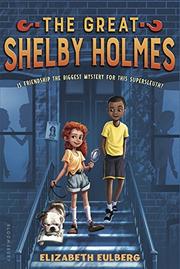 From the Shelby Holmes series, volume 1

John's an Army brat who's lived in four states already. Now, with his parents' divorce still fresh, the boy who's lived only on military bases must explore the wilds of Harlem. His new life in 221A Baker St. begins inauspiciously, as before he's even finished moving in, his frizzy-haired neighbor blows something up: "BOOM!" But John's great at making friends, and Shelby certainly seems like an interesting kid to know. Oddly loquacious, brusque, and extremely observant, Shelby's locally famous for solving mysteries. John’s swept up in her detecting when a wealthy, brown-skinned classmate enlists their help in the mysterious disappearance of her beloved show dog, Daisy. Whatever could have happened to the prizewinning Cavalier King Charles spaniel? Has she been swiped by a jealous competitor? Has Daisy’s trainer—mysteriously come into enough money to take a secret weekend in Cozumel—been placing bets against his own dog? Brisk pacing, likable characters, a few silly Holmes jokes ("I'm Petunia Cumberbatch," says Shelby while undercover), and a diverse neighborhood, carefully and realistically described by John, are ingredients for success.

A smart, fresh take on an old favorite makes for a terrific series kickoff