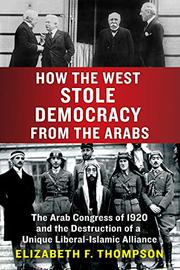 HOW THE WEST STOLE DEMOCRACY FROM THE ARABS

The Arab Congress of 1920, the Destruction of the Syrian State, and the Rise of Anti-Liberal Islamism

An impassioned argument that the Arabs of Greater Syria who fought for the Allies in World War I, deeply committed to the Wilsonian notion of self-determination, were robbed of their chance at democracy.

Thompson, the Mohamed S. Farsi Chair of Islamic Peace at American University, claims that this tragic story of Syria’s occupation by England and France—and their deliberate effort to “destroy the Syrian Arab state” just as it was forming its democratic constitution—has “never before been told in English.” She notes that only four books have covered the Syrian Arab Congress and its drafting of a “147-article constitution modeled on its Ottoman predecessor with modifications inspired by American federalism and checks and balances”—a document created within the slim window between the declaration of Syrian independence and the imperial partition of Syria as agreed upon at the San Remo Conference in April 1920. Beginning in 1916, Prince Faisal, the championed leader of the Arab revolt against the Ottoman Empire who was famously advised by T.E. Lawrence, defied his father in advocating for Syrian independence. Yet with Woodrow Wilson incapacitated by stroke, English and French leaders, using the League of Nations system of mandates as pretext, declared Faisal’s government illegal. The author clearly demonstrates how they planned the occupation and partition just as a remarkable coalition of liberals and religious leaders agreed on a system protecting minorities to “balance freedom and rule of law.” In a book sure to interest students of Middle Eastern history, particularly in the 20th century, Thompson fashions an original, authoritative study, laying out the process of the “theft” of Syrian democracy. “The history of postwar Syria,” she writes, “reveals that the tragedy of the 1919 [Paris Peace] conference was due not to the oversight of a few exhausted and old-fashioned statesmen, but rather to their vigorous effort to expand a colonial and racialist world system.”

Bitter lessons from the past unearthed and expertly reexamined.