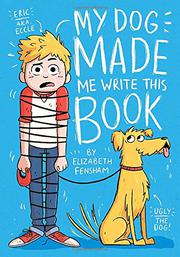 MY DOG MADE ME WRITE THIS BOOK

From the My Dog Ugly series

Nine-year-old Eric was thrilled to get a puppy from the animal shelter. But Ugly has now grown into an out-of-control dog.

The primary reason for that is Eric, of course. It’s been far too easy for him to leave Ugly’s care to his busy mom, so the young dog has never received any training, and now Eric’s parents and his rather unpleasant, much older sister have lost patience with both boy and dog. Worse is that Ugly prefers the person who feeds him, leaving Eric feeling rejected and unmotivated. If Ugly isn’t to be sent away, Eric has to step up and take over, a lesson he’s quite reluctant to embrace in spite of gentle—if rather pedantic—guidance from his grandfather. Eric’s first-person narrative is represented as a book he’s writing, apparently as self-motivated bibliotherapy. With amusing advice from his friends and help from Maggie, an experienced dog trainer, Eric eventually learns his lessons—and so does Ugly. Ugly’s misadventures are believable, as is Eric’s avoidance of responsibility. Maggie provides interesting dog-training hints, and the happy ending may inspire readers to pick up Ugly’s next misadventure, My Dog Gets a Job, which publishes simultaneously. Eric, his family, and Maggie present white in Lancett’s engaging illustrations; he has at least one friend of color.

This amusing but never especially compelling dog tale is most likely to appeal to animal lovers. (Fiction. 8-11)