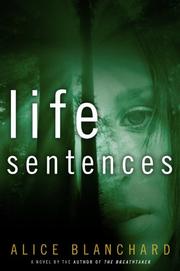 In what could be Blanchard’s breakout, a man strives to end a deadly disease by murdering all who carry it.

Heartbreaking, invariably fatal, Stier-Zellar’s attacks the young, and Daisy Hubbard has lost a six-year-old brother to the disease, which goes a long way toward explaining her choice of career. Daisy, a genetic researcher, is convinced that one day her work will earn her, among other prizes, the Nobel, as well as the self-validation that comes with eliminating a merciless child-killer. So Daisy’s a brain, and it’s entirely possible her sister Anna, three years younger, might be recognized as one, too, if she weren’t so flaky. Anna creates uproar—that’s her history. Among other stunts, she vanishes from time to time. Burrowed down, then, in her exhaustively demanding Boston lab, Daisy is not eager to drop everything and take off to California to search for Anna. But she goes anyway, persuaded by her mother that this disappearance signals something truly ominous. Her mother’s right. Turns out that Anna is one of three De Campo Beach residents to go missing, and LAPD detective Jack Makowsky has begun to think it might be the work of a serial killer. Nice guy that he is—and smitten besides—he tries to hide that from Daisy, but he can’t. By this time, Roy Gaines—smart, manipulative, hopelessly demented, a kind of minor-league Hannibal Lector—has entered the picture. Slowly, the shaken Daisy begins to understand what might have happened to her sister. What she has yet to comprehend is the secret she shares with a remorseless sociopath.

Blanchard (The Breathtaker, 2003, etc.) is just a bit long-winded in two or three scenes, but his characters are exceptionally strong and his plotting is sure-footed.

THE BREATHTAKER
by Alice Blanchard
Fiction