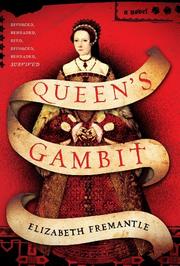 Once more unto the six wives of Henry VIII, this time for the story of Katherine Parr, the older wife with healing skills who survived the king.

Sins, secrets and guilt dominate the landscape of British writer Fremantle’s debut, which offers a lengthy account of the waning days of King Henry. The Katherine Parr she describes is a well-meaning woman in her 30s whose conscience is burdened by helping her second husband, agonized by ill health, to die and by the death of an illegitimate baby whose birth followed her sexual self-sacrifice during an armed uprising, staged to save the virginity of her stepdaughter. Katherine has no ambitions to be queen. Instead, newly widowed, she finds herself powerfully attracted to high-profile courtier Thomas Seymour, but their passionate affair is shattered by the king’s determination to marry Katherine. Life at court is perilous. Katherine is strong when the king favors her but threatened by political factions and unable to conceive the heir that would make her invulnerable: "Her safety hangs on the whims of a volatile old man." The author depicts a kindly queen driven to desperation by a life of peril and concealment who, even after Henry’s death, enjoys mixed fortunes.

With not much plot to drive her narrative, Fremantle’s emphasis is on intrigue, character portraits and the texture of mid-16th-century life. Solid and sympathetic.