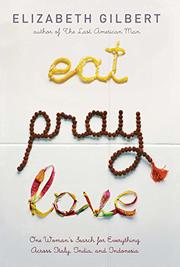 One Woman’s Search for Everything Across Italy, India, and Indonesia

An unsuccessful attempt at a memoir from novelist and journalist Gilbert (The Last American Man, 2002, etc.).

While weeping one night on the bathroom floor because her marriage was falling apart, the author had a profound spiritual experience, crying out to and hearing an answer of sorts from God. Eventually, Gilbert left her husband, threw herself headlong into an intense affair, then lapsed into as intense a depression when the affair ended. After all that drama, we get to the heart of this book, a year of travel during which the author was determined to discover peace and pleasure. In Rome, she practiced Italian and ate scrumptious food. Realizing that she needed to work on her “boundary issues,” she determined to forego the pleasure of sex with Italian men. In India, she studied at the ashram of her spiritual guru (to whom she had been introduced by the ex-lover), practiced yoga and learned that in addition to those pesky difficulties with boundaries, she also had “control issues.” Finally she headed to Bali, where she became the disciple of a medicine man, befriended a single mother and fell in love with another expat. Quirky supporting characters pop up here and there, speaking a combination of wisdom and cliché. At the ashram, for example, she meets a Texan who offers such improbable aphorisms as, “You gotta stop wearing your wishbone where your backbone oughtta be.” Gilbert’s divorce and subsequent depression, which she summarizes in about 35 pages, are in fact more interesting than her year of travel. The author’s writing is prosaic, sometimes embarrassingly so: “I’m putting this happiness in a bank somewhere, not merely FDIC protected but guarded by my four spirit brothers.”

Lacks the sparkle of her fiction.