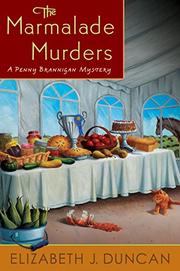 Could a trophy possibly be a motive for murder?

Canadian expat Penny Brannigan’s lived for nearly 30 years in the lovely Welsh town of Llanelen, where she and her business partner, Victoria, run a successful spa. Always happy to give back to the community, she agrees to judge the children’s pet contest at the local agricultural show and to join Victoria in checking in the home crafts the night before the show. Joyce Devlin and Barbara Vickers, who help them set up, warn that the time to accept entries ends promptly at 8 p.m. Never having realized how fiercely competitive the entrants are, Penny’s surprised to learn when she phones her friend Florence Semble, whose entries are close to missing the deadline, that someone has called to tell her not to bring in her entries until Saturday morning. Penny's phone call saves Florence’s entries, but then, after they arrive, Florence's cake and marmalade vanish before they can be judged. After the show ends, Penny discovers a body hidden under a table with the smashed remains of Florence’s cake. The dead woman is Gaynor Lewis, whose daughter, Michelle, has been looking for her ever since she missed the contest won by her granddaughter’s pet. Ever curious, Penny (Murder is for Keeps, 2017, etc.) sets out to help her friend Inspector Bethan Morgan solve the case. Although Florence’s entries were sabotaged, other people may also have had reason to kill Gaynor, including her ex and his new wife. Penny grows especially suspicious of Joyce Devlin, the sister-in-law who was barely on speaking terms with Gaynor and has just built an expensive new kennel despite a stack of unpaid bills, and Gaynor's sister, Andrea Devlin, a trans woman recently returned to the area, who freely admits to hating Gaynor. In truth, though, so many people are hiding innocuous secrets that it’s hard to discern the truth in time to prevent another death.

One of Duncan’s best mysteries, with plenty of suspects and motives but no easy answers to whodunit.