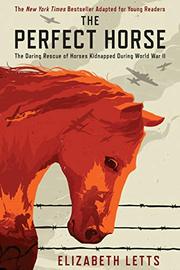 The Daring Rescue of Horses Kidnapped During World War II

Letts adapts her bestselling 2016 work of the same title for young readers.

As World War II sweeps across Europe, the fates of several master horsemen become entwined. In Poland, Andrzej Kristalovich, head of the national stud farm, sees his life’s work disappear when Russian soldiers capture his horses. Nazi Germans, invading next, restore some of the animals in order to breed them for the Third Reich. Meanwhile, in Vienna, Olympic medalist Alois Podhajsky is desperately trying to care for the Lipizzan stallions at the famed Spanish Riding School even as the invading Germans capture the Lipizzan stud farms and move most of the horses to Czechoslovakia. Meanwhile, at an American Army base in Kansas, Maj. Hank Reed is overseeing the cavalry’s transition from horses, no longer useful in warfare, to mechanized vehicles. These threads come together at the end of the war when Reed orchestrates a complex rescue of both sets of horses. This is not a particularly successful adaptation. It’s shorter than the original, but both the storyline and timeline are fragmented, making it difficult for the putative audience of 8- to 12-year-olds to follow, and extraneous details fail to advance the main narrative. Aside from a map and archival images (both not seen), there is no timeline or other visual aid to help organize the narrative. Characters are all white.

If readers can make sense of this story, they’re likely able to tackle the original instead.