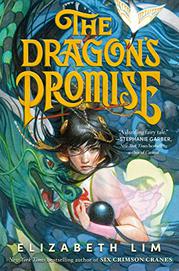 A young woman is on a dangerous mission to fulfill a promise.

In the conclusion to the story that began in Six Crimson Cranes (2021), Shiori, the Princess of Kiata, begins her adventures at the bottom of the Taijin Sea. She’s about to confront the Dragon King and learn more about the broken pearl her stepmother left for her to return to its rightful owner. Her promise to do so will ultimately test and reveal the bonds of family and country as well as her love for Takkan, the boy she left behind. While she still has a sense of mischief and remains quite stubborn, Shiori has learned from the past and tames her impulsivity with a willingness to listen to advice and see past surface appearances. Although the designated villains are still clearly bad, it is her potential allies who help round out the characters’ motivations and present surprises that further Shiori’s personal development. The writing is vibrant and colorful, as with the descriptions of palaces both on land and sea, the variety of foods served by street vendors, and the treacherous world of demons. The story continues to reference the source material from “The Wild Swans” while integrating familiar Chinese myths and legends. Most characters are assumed East Asian.

For readers seeking sincere romance and quests, this fulfills its promise.