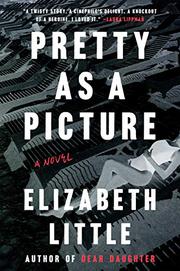 PRETTY AS A PICTURE

Murder and mayhem plague a film set on a secluded island off the coast of Delaware in Little’s (Dear Daughter, 2015, etc.) sophomore thriller.

When film editor Marissa Dahl takes a job on a new film directed by the talented but temperamental Tony Rees, she’s not given a script and must sign a mile-long nondisclosure agreement. It’s not ideal, but she needs the work. Escorted by an attractive ex–Navy SEAL named Isaiah, Marissa arrives on Kickout Island to find a bustling set, headquartered at a beautiful hotel, that is cloaked in secrecy and beset with dysfunction. Once Marissa gets down to work, she realizes that picking up the slack from the previous editor, who was fired for unknown reasons, won’t be smooth sailing and that the movie is based on the real-life unsolved murder of aspiring actress Caitlyn Kelly 25 years ago on that very island. Most folks assume that an eccentric ferry captain named Billy Lyle, a friend of Caitlyn’s, was the killer, but there was never enough evidence to convict. A few people, however, think he may be innocent. Marissa sets out to discover what really happened to Caitlyn with the help of Isaiah and two intrepid, tech-savvy 13-year-olds—Grace Portillo and Suzy Koh, whose parents work for the hotel. What she finds is a dead body and a whole lot of trouble. Readers fascinated with the behind-the-scenes machinations of a movie set will be enthralled, plus there’s a frisson of romantic tension between Isaiah and Marissa, and the island setting lends some spooky atmosphere. Snippets from Grace and Suzy’s true-crime podcast, Dead Ringer, are also sprinkled throughout. Though a killer on the loose adds a fair bit of urgency in the second half, the main focus is on Little’s singular narrator. Marissa relates to the world primarily through film and considers herself anything but typical: “It’s possible I’ve spent so much time watching movies that the language of film has infiltrated some primal, necessary part of my brain. I catch myself processing my own emotions in scenes, in shots, in dialogue.”

A quirky and distinctive heroine headlines this fun and fast-paced thriller loaded with cinematic flourishes.