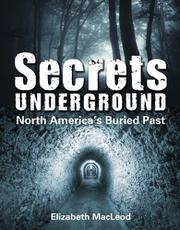 MacLeod digs into historical records (though not particularly deeply) to shine a light on selected tunnels and other underground installations that have fallen into obscurity.

Her chosen sites, evidently selected more for geographical spread than similarity, range from the ruins of Tenochtitlán’s Templo Mayor below Mexico City and a West Virginia cave that became an important secret source of saltpeter for the Confederacy to tunnels beneath Moose Jaw, Saskatchewan, used by Chinese immigrants and bootleggers, and a huge bomb shelter built for Congress during the Cold War. All have intriguing histories, though much of what the author relates is speculative or, like the scene-setting miniepisodes that open each chapter, invented to crank up the drama. She also doesn’t consistently drill down to specific details about how these subterranean wonders were constructed or, in more modern times, reconstructed. Furthermore, though most of the images and period photos add informative visual notes, some filler has been mixed in, and several sidebars are poorly placed—being, at best, only marginally related to adjacent passages.

Still, this will give general readers hints of what draws spelunkers and urban archaeologists to probe below our planet’s surface.