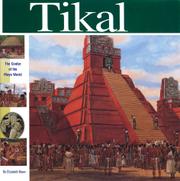 The Center of the Maya World

Despite plenty of recent archaeological and paleographical discoveries, ancient Mayan history and culture remain by and large great unknowns—a reality that forces even careful, reputable writers like Mann, author of the brilliant Brooklyn Bridge (1996) and other studies of great monuments, into generalizations and speculation. Here, she sketchily traces the 1,700-year career of a sprawling, strategically placed commercial center that apparently enjoyed centuries of prosperity until falling to an alliance of rivals, then rose again under a series of kings, of which little beyond major building projects and exotic-sounding names seems to be known, before suddenly, for no evident reason, being abandoned around 900 CE. For the illustrations, color photos of elaborately ornamented Mayan art, capped by a striking aerial view of Tikal’s pyramid-strewn Great Plaza today, are interspersed with sometimes uncaptioned painted scenes featuring generic figures laboring, shedding each other’s blood, or standing about to give the city’s magnificent buildings scale. Young readers will certainly come away with an appreciation for Tikal’s ruined splendors, but the art and narrative combine to communicate even more clearly a sense of how little we really know about this complex civilization. Still, a reading list would have been nice, especially considering the pace of new discoveries, and the availability of such engaging related titles as Laurie Coulter’s Secrets in Stone: All About Maya Hieroglyphs (2001). (map, timeline, glossary, index) (Nonfiction. 10-13)