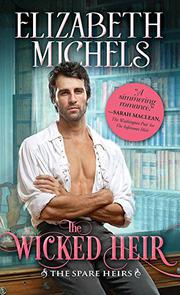 An idealistic young woman blunders into a deadly power struggle between unscrupulous men in Regency London.

Lady Isabelle Fairlyn is good to the core. She loves art and flowers and balls and handsome gentlemen with heartfelt smiles. She thinks of herself not as a person or a woman or even a girl but as a lady. Her naiveté makes her no match for the men she tangles with, especially Fallon St. James. Fallon is the founder and leader of a secret club called the Spare Heirs Society. Meant to give younger sons purpose and a means of supporting themselves, the club manages a multitude of relationships and business concerns that exist in a grey area between moral, legal society and the darker side of London. When Reginald Grapling, a former member of the club, escapes from prison, he decides to use Isabelle to get revenge on Fallon and on Isabelle’s father, who is one of Fallon’s associates. Isabelle is an easy target. She is looking for love and is not being very subtle about it. Grapling steals her diary, learns what she is looking for in a mate, and pretends to have exactly those qualities. This is just one irritating aspect of an unnecessarily convoluted plot but by far the least frustrating from a reader’s perspective. Michels (The Rebel Heir, 2016, etc.) has created a compelling and complex hero. We know what motivates him, we empathize with his loneliness, and we want him to put his demons to rest. But in the third book of her Spare Heirs series, Michels has created a heroine so flighty and silly that most readers won’t want her dreams to come true. They’ll just want her to stop talking.

A tale that borrows much from Beauty and the Beast.