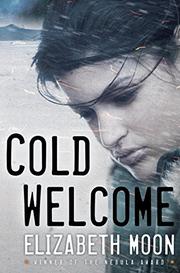 After an extended—and impressive—excursion into fantasy, Moon returns to science fiction, picking up her Vatta’s War series (Victory Conditions, 2008, etc.) where she left off.

Although no prior knowledge is assumed or required, we plunge immediately into a swirl of familial politics and interstellar intrigue. Following her victory in the recent brutal war, Ky Vatta, now the youthful Grand Admiral of the interstellar Space Defense Force, returns to her home planet, Slotter Key. But Ky’s shuttle loses contact and crashes into the sea. Searches, hampered by a lack of communications, appalling weather, official foot-dragging, and a deliberate, long-term effort to conceal the region from probes, prove fruitless. Ky must take command of a motley band of soldiers who only reluctantly accept her authority—they report to Slotter Key, not Ky’s space fleet—and weld them into a force capable of survival, maybe even fighting, in the extreme cold. Neither Grace Lane Vatta, Ky’s great-aunt and Slotter Key’s civilian Rector of Defense, nor Stella Vatta, CEO of the family business empire, believe Ky is dead. And Ky’s love interest, Rafe Dunbarger, CEO of a corporation that makes ansibles (instantaneous communicators), has a secret, private method of communication, so he knows she’s alive. Once again, Moon’s great strength is her characters, particularly the soldiers and how they comport themselves when under great stress. Less robust, the underlying plot, or what little’s discernable here, comes across as a trudging retread of previous conspiracies and treacheries. And while the life-and-death situation intrigues, the overall narrative lacks tension—Ky’s successfully negotiated so many similar circumstances we never seriously consider the possibility that she’ll be killed or even defeated.

Solidly engrossing if unspectacular fare, with greatest appeal to readers who prefer the familiar over the innovative.