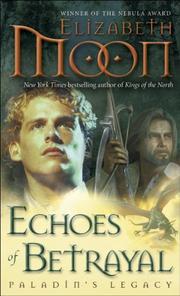 From the Paladin's Legacy series, volume 3

The third installment in Moon's Paladin's Legacy series (Kings of the North, 2011, etc.) is a solid if unremarkable fantasy tale, with some rousing action and intriguing plot twists.

The current series follows up on the author’s Deed of Paksenarrion trilogy from two decades ago, and readers who aren't familiar with Moon's world will want to start at the beginning. But those who are already invested will find plenty to appreciate, even as the plot moves forward only incrementally. Nominal main character Kieri Phelan, who's found himself the king of Lyonya, a land shared uneasily between humans and elves, faces an invasion and a potential traitor from within. Elsewhere other characters encounter a powerful and aloof dragon; villains who can project their minds into others; and mages who heal by mixing humans with plants, like a sort of Tolkien take on the Swamp Thing. The range of characters can be dizzying even for series veterans, and many seemingly important players go missing for a hundred pages or more at a time. Although the book starts with a chaotic battle and ends with a shocking assassination, it feels at times like Moon is just spinning the wheels, resolving very little by the time the novel comes to a close. In between, though, she parcels out plenty of fascinating military detail (as readers of her many military sci-fi novels might expect) and gives a sense of the well-planned depth of the world she's created. At times a little formal and stilted, Moon's prose is very much in the established Tolkien epic fantasy tradition, and while it can seem staid, it's also comfortingly familiar. She's an old hand at the genre, and she knows how to deliver its most potent elements.

Readers hungry for more dragons, elves, mages and gnomes will find exactly what they're looking for.