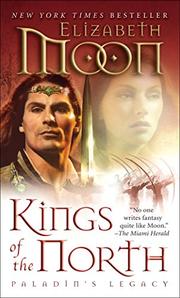 KINGS OF THE NORTH

From the Paladin's Legacy series, volume 2

War, domestic strife and evil magic threaten the rulers in various lands in the latest in the Deed of Paksenarrion series.

Half-elven Kieri, once the head of a famous band of mercenaries and now the rightful king of Lyonya, desires the aid of his co-sovereign, his ageless elven grandmother, in uniting his human and elven subjects, but she does little but pressure him to remarry. Meanwhile, the demon Achyra continues to seek the destruction of Kieri and his loved ones. In neighboring Tsaia, Kieri’s former military subordinate, Duke Dorrin Verrakai, deals with the hazardous remnants of her magelord family’s many atrocities. And both Lyonya and Tsaia will ultimately have to confront their former ally, the pirate Alured the Black, who now calls himself Duke of Immer and prepares for conquest. Readers new to the series will suffer confusion; fans seeking resolution to the many-stranded plot will require the concluding volume. Moon wrote the first Paksenarrion book more than 20 years ago; it may seem dated to populate a world with elves, dwarves, gnomes and so on, but she works hard at instilling these creatures with character and unique magic. There’s a healthy dose of action, clearly informed by the author’s military experience, which is no doubt also the source of her blunt criticism of those who object to women in combat. Decidedly a middle book, but not without its charms.