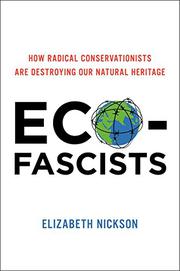 How Radical Conservationists Are Destroying Our Natural Heritage

A veteran journalist’s screed about the tyranny of the environmental movement in rural America.

With much of American biological diversity located in rural areas, it stands to reason that the people and ways of life most strongly affected by the work of conservationists are found in the hinterlands. Former Globe and Mail, Time and Life contributor Nickson (The Monkey Puzzle Tree, 1994), who owns forest property on an island in the Pacific Northwest, waged a long battle against environmentalists there for the right to build another house on her property. Aghast at her encounter with environmental regulations, the author decided to investigate environmentalism’s impact across the country. Her book is a chronicle of her personal struggle to claim her rights as a property owner and a broad, ranting overview of the environmental movement, “a grand idea corrupted by powerful fanatics” whose nongovernmental organizations rely on “a suffocating web of lies, distortions, fearmongering, and bad science.” Conservation biology and the “sophistry” of Harvard scientist E.O. Wilson, with his overblown claims of species extinction, have curtailed the use of natural resources, extinguished jobs, forced rural people off the land, and sharply diminished working- and middle-class incomes. Nickson characterizes The Nature Conservancy, a leading NGO, as a wealthy group of “virtuecrats” with deep corporate ties. Like other groups, it uses the Endangered Species Act as a weapon to “destroy rural America.” The author chronicles her interviews with aggrieved ranchers, other property owners and like-minded individuals such as philosopher of science Alton Chase, who faults conservation biology and researchers at the Property and Environment Research Center, a free-market think tank. Nickson’s sledgehammer approach contributes little to understanding the clash between conservationists and property owners.

A broad-brush demonization of environmentalism.