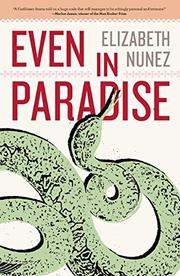 Nunez (Not for Everyday Use, 2014, etc.) spins a Shakespearean tale of patriarch Peter Duckworth, a wealthy Trinidadian landowner of European descent who divides his Barbados estate among his three daughters and sets off a disastrous series of events.

When narrator Émile  Baxter, who's black, meets Corinne Duckworth, he's 16 and she's 12, but it's love at first sight. Corinne is well-known as Peter Duckworth's “favorite child, the youngest of three daughters, the apple of his eye.” But, after a near-death experience, Peter is bent on leaving Trinidad and fulfilling his dream of moving to Barbados. The Trini islanders, however, see Duckworth’s move as an effort to “find white husbands for his daughters.” So it's not until Émile arrives at the University of the West Indies, when his Lebanese best friend, Albert Glazal, proposes to Corinne’s eldest sister, Glynis, that he meets Corinne again. On the night of Glynis’ engagement party, Peter gives his land away to his three daughters. Corrine is given the extravagant mansion and its grounds—but can only take possession after Duckworth’s death. “I will not be put out of my house,” says Peter, calling upon the fate of that famous Shakespearean king whose actions Duckworth has just repeated. And, immediately, Glynis hatches a plan to evict her father from his house and turn the land into a real estate development. What follows is an epic tale of family betrayal and manipulation couched in superbly engaging prose and peopled with deftly drawn characters. In a story structure as rhythmic as the ebb and flow of the water surrounding Trinidad and Barbados, this revisiting of the classic story of King Lear becomes a subtle, organic exploration of politics, class, race, and privilege.