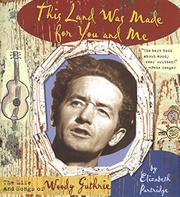 THIS LAND WAS MADE FOR YOU AND ME

The Life and Songs of Woody Guthrie

Woody Guthrie was arguably the greatest of American folk singers. Born in poverty and living most of his troubled life poor, he wrote over a thousand songs chronicling his journeys across Depression-era America. He wrote about the people he knew—the fellow wanderers, the migrant workers, hoboes, unionists, and the dispossessed in all walks of life. Always restless, rootless, and volatile, Guthrie never was able to settle down and make a marriage work, frequently leaving on unannounced trips across the country for weeks on end. Often dirty, smelly, and contentious, Guthrie was a hard friend. Yet his place in American music is secure, and this fascinating, new biography will introduce him to a new generation of readers. Beautifully designed and illustrated with over 70 black-and-white photographs, this well-written account is a fitting tribute to an American legend. Partridge, whose earlier work on Dorothea Lange (Restless Spirit, 1998) was equally powerful, portrays many of the rough and tragic sides of Guthrie’s life: the failed marriages, the “curse of fire,” the lack of responsibility in his personal life, and the tragedy of his final years, when he was hospitalized from 1954 until his death from Huntington’s disease in 1967. She also portrays the triumphs of his music career and offers the stories behind many of his most famous songs. Guthrie’s life spanned the Great Depression, WWII, the McCarthy era, and the early civil-rights movement. His work breathed new life into the folk-music movement, though the rise of folk music coincided with the decline in his health. At the end of this story, readers see 19-year-old Bob Dylan arriving to meet Woody and being inspired to carry on his work. Young readers will also be inspired—to see how Woody Guthrie achieved greatness, though the road he traveled was hard and troubled. A nice one-two punch with Bonnie Christensen’s recent picture book, Woody Guthrie: Poet of the People (2001). (author’s note, endnotes, index) (Nonfiction. 12+)