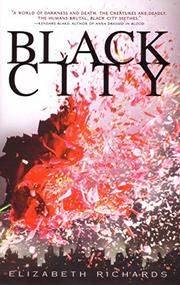 From the Black City series, volume 1

Ash is a scorned twin-blood Darkling—hybrid son of a human and a vampire—who hustles Haze, the drug that occurs naturally in Darkling venom, to the addicted human youth of Black City. Natalie is all human, daughter of Black City’s newly returned Emissary, local head of the national government that just won a bitter war against the Darklings and is committed to racial purity. When they meet under a bridge after Natalie slips her security detail, Natalie’s heart skips a beat. So does Ash’s, which is seriously weird, because twin-bloods’ hearts don’t beat at all. (Full Darklings have two hearts, one of the book’s many arbitrary and wholly unconvincing quirks of biology.) They meet again at school; they engage in pro forma animosity; they realize they love each other. While this narrative arc is entirely predictable, at least it is relatively short—but into the mix are thrown political upheaval, a murder mystery, a contagious wasting disease, brutality against animals, parental infidelity, steamy near-sex scenes, vivisection and public crucifixions, along with grindingly obvious parallels to Nazism and the American skinhead movement. Copious infodumps do not compensate for slipshod worldbuilding. There is as little nuance to the relationships as everything else; in addition to the ludicrous destiny that binds Natalie and Ash, friendships dissolve and come back together with all the subtlety of a preschool playground.