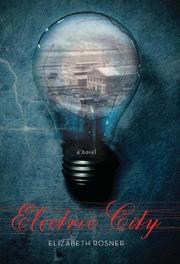 Rosner (Blue Nude, 2006, etc.) draws on the immigrant experience of Charles Porteus Steinmetz, the Wizard of Schenectady, as the background to a coming-of-age novel.

The novel starts off in 1919 exploring Steinmetz's work at "The Company" in Electric City (think General Electric in Schenectady) and the great scientist’s friendship with Joseph Longboat, a Mohawk. Later, the story takes up the lives of Sophie Levine, Henry Van Curler, and Martin Longboat, Joseph's grandson. Sophie’s parents escaped from Holland, their families consumed by the Holocaust. Henry, surviving scion of the region’s first settlers, copes with disconnected parents grieving the accidental death of an older son. Martin, like his grandfather, is a gentle soul attuned to nature. In 1965, the three are approaching the end of their high school years. An unlikely romance begins between Sophie and Henry. That love doesn’t shut out Martin, but he "had no idea what to offer when a girl aimed her heart away from him." Later, as the three lark about ice skating, Henry falls through the ice and drowns. Sophie and Martin each suffer differently. "Losses were the exact size of sorrows left unspoken." With deft descriptions, Rosner sketches the bustling city, on land long cherished by aboriginal culture, which grew and flourished as whites invaded and industrialized. The narrative is woven through with symbolic allusions; for instance, the characters' personal losses are mirrored by the physical decline of the once-vibrant city after bottom line–obsessed managers begin sending jobs overseas—"Electric City was being disconnected, unplugged from its own socket." Rosner’s best work, however, is developing the characters of the three young people—Henry, tentative, suppressed, dead before he had a chance to flourish; Sophie, gutted by Henry’s death, turning every energy to the study of medicine; and Martin, haunted by the oppression of his people and choosing Canada over the Vietnam draft.

Rosner offers a gentle meditation on love and loss: "Rivers, oceans, the passing of molecules back and forth, darkness into brilliance and then gone."