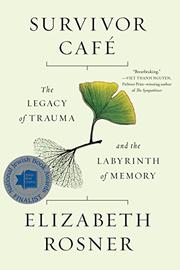 The Legacy of Trauma and the Labyrinth of Memory

Trauma informs a memoir palpable with anger, sorrow, and frustration.

Poet, essayist, and novelist Rosner (Electric City, 2014, etc.) feels an intimate connection to the Holocaust: her father was imprisoned in Buchenwald concentration camp when he was 15, and her mother, at the age of 12, fled from her home in the Vilna ghetto and lived in hiding for two years, until the Russians drove the Nazis out of Poland. The two met later, married, and immigrated to the United States, where Rosner and her siblings were born. German culture and language were forbidden in her family, yet the author’s life was shadowed by her parents’ history. “Shards of their past lodged themselves inside me at birth, if not before,” she writes, which infused her life with “grief, anxiety, rage, and so much more.” Those emotions are shared, Rosner knows, with many others whose lives were blighted by atrocities: Vietnamese boat people, victims of the Cambodian Killing Fields, Japanese descendants of atom-bomb survivors or families interned in American camps, and survivors of Armenian, Rwandan, or Native American genocides. Although she empathetically considers others’ experiences, her focus is on how her own identity has been shaped. The author looks to epigenetics for evidence of intergenerational trauma, passed to offspring in “mother’s milk drenched in sadness” and other visceral ways: “we are inheriting more than the overt repeating of survival stories.” Rosner acknowledges the need “to interrupt the cycle of trauma” through therapy and, at the same time, believes that the culture urgently needs those stories to ensure that the past will not be forgotten. She repeatedly expresses frustration with the inadequacy of words to convey horrific reality as well as by memorials and museums that fall short of offering “a personal shape for such collective and monumental mourning.” Central to the narrative are three visits to Buchenwald with her father, for a commemoration, where inmates, liberators, and German residents gathered at a Survivor’s Café, an emotional reunion.

A thoughtful, probing meditation on the fragility of memory and the indelible inheritance of pain.