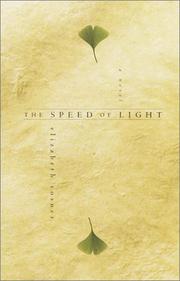 THE SPEED OF LIGHT

It’s hard not to like this lyrical, gently paced debut that confronts the terrible legacy carried by children of trauma and tragedy.

Paula Perel and her older brother Julian bear the anguish of their father's Holocaust memories in vastly different ways: Paula sublimates her personality by becoming a professional singer of lieder (although forbidden by her father to sing in German), while Julian, a grad student in physics, retreats into the antisocial and deafening silence of his eleven TV sets. Now orphaned and living on their own on two floors of a Berkeley apartment, Paula must leave on a Grand Tour to make a name for herself in Europe; she invites her cleaning lady, Sola Ordonio, to stay and keep an eye on her paranoid, solitary brother, who lives upstairs. Sola, a 30ish political refugee from an unnamed South American country where, years before, she witnessed the massacre of her family, brings Julian his lunch and picks up plates. Gradually, the sympathy between the two emotionally diffident characters grows. Rosner takes excruciating pains to weave the threads of her narrative in alternating points of view, and the slow-moving action back in forth in time is examined in many tireless facets. Rosner has an expert command of her material (she herself is the child of Holocaust survivors), from the Hungarian Jewish father's past as a Sonderkommando at Auschwitz and Sola's terrifying memories of witness to the nuances of opera singing. And everywhere poet Rosner exhibits her care in the use of language, such as the comparison of a piano, its cover closed and keys hidden, to a woman “ashamed to show her teeth when she smiles.”

A thoughtful, earnest first novel: it doesn't take any risks but sticks faithfully to its affecting mark.