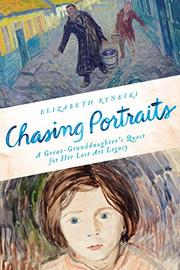 A Great-Granddaughter's Quest for Her Lost Art Legacy

A page-turning personal history of Rynecki’s search for her great-grandfather’s legacy.

Moshe Rynecki (1881-1943) was a Polish artist whose work “detailed the everyday lives of Polish Jews in the 1920s and 1930s.” His singular oeuvre shows the culture and quotidian activities of his people, and his very identity was intimately tied to his Jewish heritage, even to the point of following them into the Warsaw ghetto. He was an ethnographically inspired painter and thought abstract styles would detract from the world he was portraying. He and his wife, Perla, operated an art supply store—or she did while he painted. By the time of the Nazi invasion in 1939, he had 800 works that needed to be protected. With his son George’s help, he took paintings out of frames, rolled them up, and put them into piles. Moshe also made a list of which pieces went into each pile, but, unfortunately, the list was lost. The works were entrusted to friends to be retrieved after the war. When the Nazis moved the Jews into the ghetto, George refused to take his family, hiding their Jewishness with new identities. Because Moshe would not deny his heritage, he and Perla entered the ghetto. In 1942, George got his mother out, but his father felt that he had to go “where brothers and sisters go. And if it’s death, so be it.” The last they heard was that he was on his way to a death camp. After the war, Perla found a bundle of more than 100 paintings and gave them to her son, who moved to the U.S with his wife. That much of the story is fascinating, but it’s only the beginning, as the author discovers her grandfather’s memoir and begins her search for his paintings.