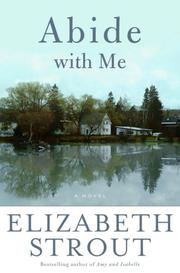 The author of Amy and Isabelle (1999) returns with her second novel.

Strout earned critical acclaim and nominations for a few prestigious awards—including the PEN/Faulkner and the Orange Prize—with her debut tale of a New England mother and daughter. Now, she moves a few towns over to tell the tale of a Congregationalist minister who has lost his wife and, maybe, his faith. Tyler Caskey had always believed in his calling. He truly loved preaching, and his flock loved him. All this changed when his vibrant young wife died, leaving him with two little girls and an existential crisis. As Tyler falters, the affection and admiration he once inspired goes sour, and, as his congregation turns on him, Strout reveals the many dark and unhappy secrets of West Annett in the 1950s. Most of the characters in this novel are fundamentally bewildered, and many of them are quite bitter as well. The narrator’s folksy tone does nothing to enliven this dispiriting story; the overall effect is rather like listening to a slightly cantankerous maiden aunt dispensing local gossip. The only truly bright spot in this novel is Tyler’s five-year-old daughter, whom Strout depicts as an imaginative and sensitive child. The reader might well long for more of her, and will undoubtedly wish that her self-absorbed father hadn’t condemned her to a year of despair and neglect. When Tyler finally breaks down—he staggers from his pulpit, unable to face either the people in the pews or his own doubt and confusion—his stumble turns out to be a spiritual awakening for him and his congregation, but the redemptive ending doesn’t quite make up for the gloom and spitefulness of the preceding pages.

A melancholy tale of faith lost and found and an unhappy look at small-town life.