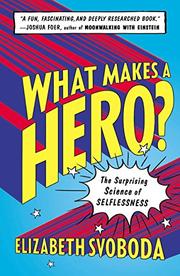 WHAT MAKES A HERO?

The Surprising Science of Selflessness

A personal quest to become more mindful takes science writer Svoboda on a search for outstanding examples of heroism and how they relate to altruism.

The author chronicles her interview with psychologist Philip Zimbardo, architect of the famous Stanford Prison Experiment, which showed how ordinary students could be induced to become sadistic under certain circumstances. Now emeritus, he is investigating how ordinary people become heroes—and not only soldiers and firefighters. Svoboda notes former sky-diving instructor Dave Hartsock. During a sky dive with a passenger, her parachute malfunctioned, and he made a split-second decision to risk almost certain death by using his body to shield her. Despite being confined to a wheelchair, Hartsock (now a lifestyle coach) says that he gets great satisfaction from his choice. He believes that such sacrifices may correlate to a lifestyle commitment to service. Svoboda also examines a five-year longevity study of older volunteers who showed a 60 percent reduction in the death rate of individuals regularly involved in charitable activities. She cites behavioral economist Paul Zak, whose research establishes an association between the pleasurable release of oxytocin and empathic moral behavior in general. The author visited laboratories where neuroscientists are using brain scans in an attempt to pinpoint what happens in the brain when people contemplate making sacrifices to help others. She participated in an experiment that showed a reward center in her brain lighting up when she imagined making charitable decisions. A visit to a charter high school introduced her to a pilot program developed by Zimbardo to train students to become “every-day heroes” by examining their values. Ordinary acts of goodwill are pleasurable and “enhance our ability to step up” should the need arise for “the kind of heroic choice that involves a high level of personal sacrifice.”

A satisfying investigation of the mechanics of heroism.