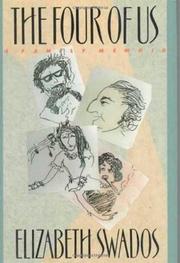 THE FOUR OF US

The Story of a Family

Swados (Listening Out Loud, 1988, etc.), a writer/composer best known for the musical Runaways, offers a painful memoir of growing-up in a family beset by mental illness—with compelling ghastliness in many of the details but insufficient overall drama or insight. A brief prologue introduces the family: the Swadoses—Jewish, upper middle class—in 1950's and 1960's Buffalo, where ``appearance was everything.'' Then come four long chapters, each focusing on one member of the family. First, and always foremost, is Elizabeth's schizophrenic older brother, Lincoln: eccentric, filthy, and brilliant as a child, he fell wildly ill during college, attempted suicide at 24 (losing an arm and a leg), and became a Lower East Side ``character'' who eventually died in wretched isolation. Next Swados turns to her depressed, alcoholic mother—sporadically creative but ``in her heart...a lonely orphan'' who committed suicide when the pressures (her son's condition, her suffocating marriage) became too much. Then there is father Robert, who reacted to the family illnesses (including his mother's schizophrenia) with rage and sheer activity, losing himself in an all-consuming sports-law career. And finally there's Elizabeth herself, always driven to be ``the child about whom my father could tell stories to his clients'': She overachieved like crazy, composing and performing, getting admitted to Bennington at 16, scoring Medea at La Mama for Andrei Serban at 19; she also exhausted herself with wild living, determined not to be like her conformist parents. The four-part structure here makes for a repetitious and often anticlimactic narrative, without satisfying shape or development. Swados's prose doesn't have enough variety or grace to fill out such an ambitious design. But her sincere attempt to understand her family's misery is often affecting, and the story of brother ``Lincoln Sail'' (as he called himself) is, though disjointed, grimly fascinating.