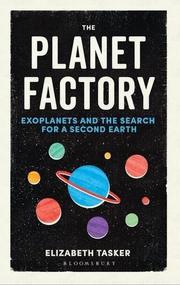 Exoplanets and the Search for a Second Earth

An astronomical journey that explores how our cosmos “is an unseen creature that we are struggling to understand through the small sections we have uncovered.”

Headlines greeted the 1995 discovery of the first planet circling another sunlike star. The number now approaches 4,000, and more continue to turn up. Astrophysicist Tasker (Solar System Science/Hokkaido Univ.) joins the steady stream of authors eager to tell the story. After reviewing the dazzling technology required to detect planets millions of times further out than Pluto, she explains that planets form along with their sun from a whirling disc of gas and dust. Gravity and heat from the young sun eliminate nearby gas, so inner planets are small and rocky. Further out, gas and unvaporized ice remain, resulting in giant planets with thick atmospheres. Our system—four small, rocky inner planets and four immense, gassy outer planets in symmetrical orbits—gave astronomers confidence in their explanations, until exoplanets destroyed it. The first discoveries were huge “hot Jupiters” so close to parent stars that they orbited in a few days. Equally confusing were “super-earths,” with wildly varying sizes, atmospheres, and orbits. Well-behaved systems like ours barely exist. Everyone yearns to find another planet suitable for life, which would be similar to ours and at a distance from its sun where the temperature allows liquid water to exist. Many are turning up, but Tasker, no Pollyanna, reminds readers that Venus, Mars, and the moon are also in our sun’s temperate zone, and scientists still debate why Earth seems unique. An active researcher, the author clearly knows nearly everything about extrasolar planets, so readers will encounter fascinating details but also learn perhaps more than they want to know about star behavior and planetary formation and evolution.

Despite some information overload, this is an irresistible subject, and readers will find Tasker’s richly detailed account entirely satisfactory—until events overtake it in a few years.