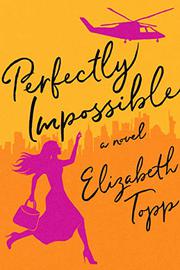 The personal assistant to unfathomably wealthy Upper East Side socialite Kissy Von Bizmark keeps her boss’s life in order while neglecting her own.

Anna, a 30-something Yale-educated struggling artist, spends most of her days not in the studio painting but in the home of Kissy Von Bizmark—Bambi to her husband, Mrs. Von Bizmark to her staff— taking care of all the minutiae that keep the family afloat. Secret plastic surgeries, splashy vacations on the private jet, a fancy personal chef flown in from Colombia—Anna finagles, finesses, and finds a way to fulfill her employer’s every whim. But when the Von Bizmarks are to be honored at the New York City Opera’s opening night ball—following their financing of the entire production, to the tune of $12 million—Anna must contend not only with the drama of planning an over-the-top pre-gala luncheon, but with the growing marital strife between the Von Bizmarks and her own identity crisis. Readers who enjoy a glimpse into the outrageous lives of the one percent will find plenty to enjoy in the deviously decadent characters, exorbitant displays of wealth, and tongue-in-cheek humor. But it’s this flagrant privilege that also brings the novel down. Modern audiences are not the same readers who devoured The Devil Wears Prada (2003)—to which this book will no doubt be compared—almost two decades ago, and reading about $4 million credit card charges, private helicopter rides to Hamptons mansions, and beleaguered assistants now feels more out of touch than ever. With its Cinderella-at-the-ball ending and “the wealthy are just like us!” ethos, the novel reads just a shade too sincere to be truly satirical, and the wasteful ways of the superrich are never deeply examined.

A fun, but ultimately forgettable, escape into moneyed madness.