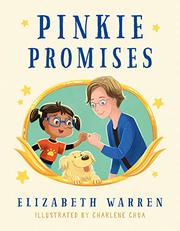 Lately, everyone seems intent on telling Polly what girls can’t do.

Whether it’s fixing a leak, building a model drawbridge, or washing a car, it seems like the world thinks that girls aren’t able to do anything. Polly is discouraged until she goes to a political rally with her mother. There, the two meet a White woman named Elizabeth (recognizably author Warren in Chua’s friendly illustrations) who’s running for president. She tells Polly that she is running because that’s what girls do: They lead. Polly and Elizabeth make a pinky promise to remember this truth. Polly decides that being a girl can’t prevent her from doing whatever she wants. Even though she’s a bit intimidated at attending a brand-new school, Polly decides to be brave—because that’s what girls do, and she makes a pinkie promise with her mom. At soccer, she’s under pressure to score the winning goal. She makes a pinkie promise with her coach to do her best, because that’s what girls do. And so on. By the end of the book, Polly ignores what she’s been told that girls can’t do and totally focuses on what they can do: absolutely anything they want. In the illustrations, Polly and her family have dark skin and straight, dark hair. The narrative is inspiring and child friendly, although the constant return to making pinkie promises feels like a distraction from the central message. (This book was reviewed digitally.)

Inspiring, if all these pinkie promises don’t get in the way.