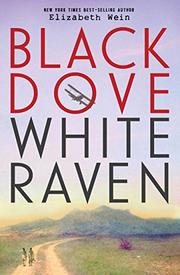 Wein returns to Ethiopia, the setting of her Arthurian adventures, for a high-flying novel about the 1935 Italian invasion.

Emilia Menotti and Teodros Dupré share no DNA, but they are otherwise as close as siblings could be. Their aviator mothers had performed together as barnstormers Black Dove and White Raven until a bird strike killed Teo’s mother as the two women were preparing to immigrate to Ethiopia, where Teo’s father had come from. Alone, Momma raises them on a remote coffee cooperative, an idyll cut short as tensions rise between the independent African nation and Italy, whose colonies border it. Wein does again what she did so beautifully in Code Name Verity (2012) and Rose Under Fire (2013): She plaits together the historical record, her passion for flying and ferociously vivid characters to create a heartbreaking adventure that grounds readers in the moment even as geopolitical complexity threatens to knock them off their feet. The story is pieced together from a combination of documents; Emmy’s opening begging Haile Selassie for help is followed by a collection of the two teens’ writings, including childhood stories, themes written for the cooperative school and long, diarylike flight logs. This device does not create as seamless a narrative as in her previous two books, and Emmy’s and Teo’s voices are often hard to tell apart, but Wein’s forceful prose will carry readers past any sense of contrivance.