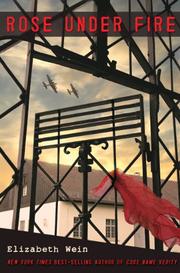 After a daring attempt to intercept a flying bomb, a young American pilot ferrying planes during World War II is captured by the Nazis in this companion to Printz Honor–winning Code Name Verity (2012).

After being brutally punished for her refusal to make fuses for flying bombs and having “more or less forgotten who [she] was,” Rose is befriended by Polish “Rabbits,” victims of horrific medical experimentation. She uses “counting-out rhymes” to preserve her sanity and as a way to memorize the names of the Rabbits. Rose’s poetry, a panacea that’s translated and passed through the camp, is at the heart of the story, revealing her growing understanding of what’s happening around her. As the book progresses, Wein masterfully sets up a stark contrast between the innocent American teen’s view of an untarnished world and the realities of the Holocaust, using slices of narrative from characters first encountered in the previous book. Recounting her six months in the Ravensbrück concentration camp through journal entries and poems, Rose honors her commitment to tell the world of the atrocities she witnessed. Readers who want more Code Name Verity should retool their expectations; although the story’s action follows the earlier book’s, it has its own, equally incandescent integrity.

Rich in detail, from the small kindnesses of fellow prisoners to harrowing scenes of escape and the Nazi Doctors’ Trial in Nuremburg, at the core of this novel is the resilience of human nature and the power of friendship and hope.